In a time of political turmoil like today, it’s hard to imagine anyone having a more insightful perspective of a president on the proverbial hot seat than Bob Woodward.

Mr. Woodward is, of course, the famed Washington Post reporter who, along with colleague Carl Bernstein, investigated and reported on the Watergate scandal and contributed greatly to the resignation of 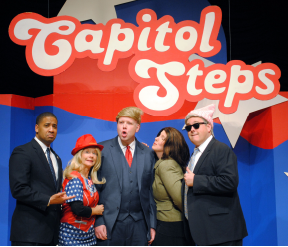 ACEP17 Keynote Address will also feature a performance by Capitol Steps, a comedy/musical troupe that has recorded more than 30 albums since its founding in 1981.
Capitol Steps

President Richard Nixon in 1974. Since then, he has written 18 books—all national bestsellers—chronicling the presidency from President Nixon through President Barack Obama.

Mr. Woodward, who now serves as associate editor for The Washington Post, sees his keynote address at ACEP17—scheduled for 8 a.m. on Sunday, Oct. 29—as a discussion of what he calls the “Age of the American Presidency.”

“The general movement is toward more power for presidents,” he said. “I think even [President] Trump, with the problems he’s having, has vast power to do things.”

Mr. Woodward knows his crowds are fascinated to hear about the gridlock of Washington, the tumult surrounding the sobriquet “fake news,” and any stories that shed light on President Trump.

The key thing I want to do in a talk like this is to spend half or more time on the questions the audience has … What are they worried about? What’s going on in government that surprises them, worries them? —Bob Woodward

Mr. Woodward knows people are coming to hear him, but he says he’s more interested in hearing from emergency physicians.

“The key thing I want to do in a talk like this is to spend half or more time on the questions the audience has,” he said. “It’s much more interesting to me, quite frankly, and hopefully more interesting to them. What’s on their minds? What are they worried about? What’s going on in government that surprises them, worries them? The question session in something like this is always—it’s the high point for me.”

Richard Quinn is a freelance writer in New Jersey.

Richard Quinn is an award-winning journalist with 15 years’ experience. He has worked at the Asbury Park Press in New Jersey and The Virginian-Pilot in Norfolk, Va., and currently is managing editor for a leading commercial real estate publication. His freelance work has appeared in The Jewish State, ACEP Now, The Hospitalist, The Rheumatologist, and ENT Today. He lives in New Jersey with his wife and three cats.