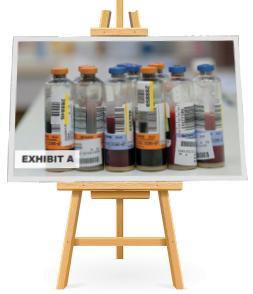 The patient was a 53-year-old male with a past medical history including hepatitis C and chronic anemia who presented to the emergency department with weakness, fever, vomiting, loose dark stools, and a rash. There were also notations that the patient had experienced “flu-like symptoms” for almost a month. The patient had been prescribed a course of ciprofloxacin for a urinary tract infection but discontinued it approximately one to two weeks prior to his emergency department visit due to the appearance of a rash. During his evaluation in the emergency department, he was persistently tachycardic with a heart rate of 120. He was given IV fluids, and multiple tests were performed, including blood cultures. Lab results showed that the patient was hyponatremic, had a stable hematocrit of 30, and had a positive nasal swab for influenza. His white blood cell count was normal without a left shift, and his lactate level, urinalysis, and chest X-ray were also normal. The following day, preliminary results of the blood cultures were positive for gram-positive cocci. That day, a message was left on the patient’s voicemail, instructing him to return to the hospital. He did not return until three days later. He died shortly thereafter from septic shock, disseminated intravascular coagulation, and multisystem organ failure.

The expert witness faulted the treating emergency physician for several issues. This review addresses the expert’s repeated assertions that because blood cultures were performed, the patient should have been admitted to the hospital and treated with intravenous antibiotics due to a suspicion of bacteremia.

Excerpts from the expert’s deposition testimony include the following:

“One would not order blood cultures and discharge a patient home with a suspicion for bacteremia,” although at the same time noting that bacteremia “sometimes resolves spontaneously.”

“If blood cultures are ordered, that means that bacteremia in the bloodstream is suspected. There is no test to prove that it exists immediately. So unless there is a reason to suspect that someone could have occult bacteremia, like the conditions I mentioned, the treatment is admission and intravenous antibiotics. Otherwise, this happens [referring to the patient’s death from sepsis]. You don’t send otherwise relatively immunocompetent patients home with bacteremia. You treat them.”

When questioned by the defense counsel about whether the expert was assuming that because blood cultures were ordered, the treating physician must have suspected bacteremia, the expert replied:

“I think doctors order things that have a low probability of being positive for a number of reasons, depending upon the disease. But in the case of blood cultures for bacteremia, it’s the only reason you do blood cultures. And if you suspect bacteremia in a patient who is immunocompetent, the treatment is antibiotics.”

When asked if the facilities at which he works discharge patients with pending blood cultures, the expert stated:

After reviewing the expert’s testimony and available literature on this topic, the Standard of Care Review Panel concluded that the expert witness presented opinions that did not represent the standard of care for several reasons.

The review panel found one study showing that the two-day mortality for patients with community-acquired bacteremia was 4.8 percent compared to 2.0 percent in culture-negative patients (0–2-day mortality rate ratio 1.9). After the first two days, mortality rates were 3.7 percent and 2.7 percent, respectively, with a mortality rate ratio of 1.1. At 30 days, the mortality in both culture-positive and culture-negative patients was approximately 10 percent, with no significant difference in mortality between the groups.3 However, this study included patients who had blood cultures performed within two days of hospital admission and who had no hospitalizations within the preceding 30 days, so the results may not necessarily apply to emergency department patients such as those presented in this review. This study also noted that as many as half of positive cultures were due to organisms inoculated from the skin into culture bottles at the time of sample collection and did not reflect true bacteremia. These false-positive blood culture results from skin contaminants may lead to unnecessary investigations and treatments.

The Standard of Care Review Panel believed that the expert’s opinions in this case were influenced by retrospective bias. The expert repeatedly stated that the treating physician should have known that the patient was bacteremic because the culture results returned positive. However, the preliminary culture results did not return until the following day. There is no way that the treating physician could have known the culture results at the time of treatment. It was the consensus of the Standard of Care Review Panel that strict prospective analysis is of utmost importance when reviewing the management of any patient care.

It was the consensus opinion of the review panel that obtaining Blood Cultures does not mandate antibiotic treatment or hospital admission.

Dr. Solomon is an attending physician at UPMC St. Margaret in Pittsburgh.

ACEP members can request a review of questionable expert witness testimony regarding emergency medicine’s standards of care. Procedures for this review are found here.