A 36-year-old woman presented to the emergency department for generalized weakness. The patient stated that over the past few days she was having a more difficult time getting out of bed. Along with this, she complained of a chronic right-sided chest pain and intermittent lightheadedness. Vital signs showed a heart rate of 123 bpm without any evidence of hypoxia or tachypnea. Physical exam showed normal S1 and S2 heart sounds without any murmurs, gallops, or rubs. Her lungs were clear to auscultation bilaterally, and she had no focal neurological deficit.

Laboratory testing was significant for a white blood cell count of 14.3 K/uL, hemoglobin of 17.8 g/dL, and a platelet count of 548 k/uL, all of which were consistent with hemoconcentration. ECG showed sinus tachycardia with a rate of 111 bpm. There were no ischemic changes or evidence of right heart strain. Troponin T and brain natriuretic peptide were within normal limits. CT angiography was obtained due to concern for pulmonary embolism and showed numerous hyperdense foci within the pulmonary arteries (see arrows in Figure 1) consistent with embolized polymethyl methacrylate (PMMA). While in the emergency department, the patient’s pain and nausea were treated symptomatically. She was given lactated ringers due to concern for dehydration. After a period of observation in the department, the patient requested discharge.

The patient stated that one year prior she was involved in a fall and as a result suffered T10–T11 compression fractures resulting in a kyphoplasty. Imaging after the procedure showed evidence of cement noted in the subsegmental pulmonary arteries of the right lower and left upper lobes. She had a resulting follow-up transthoracic echocardiogram that showed elements of pulmonary hypertension, which was confirmed with right heart catheterization. As a result, the patient had been dealing with chronic right-sided chest pain since the event and required pain management intervention. In addition, her hematologist recommended anticoagulation with warfarin for six months, which she had completed. 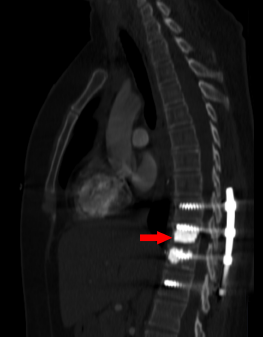 Pulmonary cement embolisms occur after kyphoplasty by two primary mechanisms: spilling into venous plexuses or retrograde leakage into the arterial system.1 This occurs when the cement placed is not solid enough or is under elevated pressure.1 The prevalence is widely variable in the literature, with ranges varying from 3.5 to 23 percent, depending on the diagnostic study used.2 Some patients are asymptomatic; others can have typical symptoms of pulmonary emboli such as dyspnea, chest pain, hypoxia, or arrhythmia.3 There have been some reports of patients experiencing cardiac tamponade and cardiac perforation.1 Symptoms rarely occur during the procedure, and most are noted days to weeks after.3 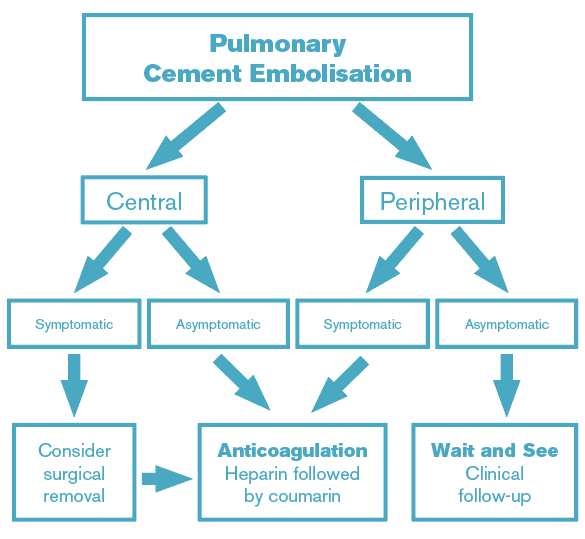 There is no consensus on treatment for this condition. One group proposed an algorithm for treatment options based on location and symptomatology (see Figure 2).2 If a patient is asymptomatic with a central clot or symptomatic with a peripheral clot, anticoagulation is recommended. Patients who are symptomatic with a central clot should have surgical removal considered. Finally, asymptomatic patients with peripheral emboli can be safely monitored. Others suggest endovascular removal of the emboli to prevent further migration of central clots and symptomatic peripheral ones.3 Based on one in vitro study, it does not appear that PMMA facilitates platelet aggravation or clot formation.4 Overall the prognosis for pulmonary cement embolism appears to be good, and in the literature, there are only six associated mortalities reported.1

Dr. Adams is a third-year resident and Dr. Effron is an attending physician in the department of emergency medicine at MetroHealth Medical Center and Case Western Reserve University in Cleveland. 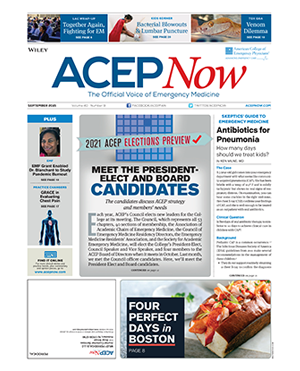 No Responses to “Unusual Etiology of Chest Pain”