By Jordan Grantham | on June 4, 2019 | 0 Comment
ACEP4U From the College
Print-Friendly Version

For the past few years, out-of-network billing (also known as surprise billing) has been a central focus of ACEP’s federal advocacy efforts, building on years of state-level advocacy on this issue. The end result of this political battle could have widespread ramifications for ACEP members, so it’s critically important that ACEP presents a strong, unified voice for emergency physicians against the powerful insurance companies that are trying to shift costs and deflect blame. This issues places reimbursement and the reputation of emergency physicians at risk.

Surprise billing legislation will set payment rates for care you provide to out-of-network patients. Various proposals are being set forth by stakeholders involved in this debate, but here’s what you need to know:

Instead of the benchmark and bundling proposals put forth by other stakeholders, ACEP is advocating for legislation that would implement a “baseball-style” arbitration system to settle billing disputes between insurers and physicians, such as the systems used in New York, which passed its own surprise billing legislation in 2014. This arbitration mechanism provides a fair and unbiased way to resolve billing disputes and takes the patient completely out of the middle. It is the least disruptive because it takes a “loser pays” approach, encouraging insurers to avoid arbitration altogether by paying for out-of-network services fairly and encouraging physicians to charge reasonably for their services.

Much of this conflict over surprise billing is playing out in the media, and insurers have been trying their hardest to paint emergency physicians in a bad light, blaming them for high costs and excessive charges. Our public relations team is working diligently to make sure the emergency physician side of the story is fairly portrayed both with the press and in Congress.

Legislation on surprise billing has significant implications for all stakeholders, so it’s been a very long, complicated struggle on Capitol Hill. ACEP has been engaged in these discussions from day one, and we’re not nearly done. 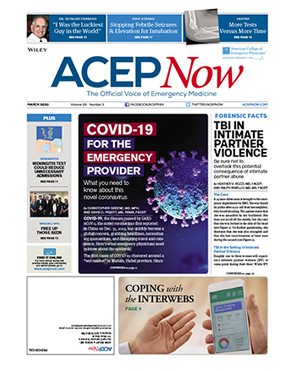