ACEP recently met with the Society of Critical Care Medicine (SCCM) to discuss the issues around the Sepsis-3 definitions of sepsis and the difficulties some emergency physicians are having with reimbursement and meeting quality measures. Many components of the Sepsis-3 definitions require laboratory values or time (response to fluids). Studies have shown that the Sepsis-3 definitions are not accurate in the emergency department, and the Centers for Medicare & Medicaid Services does not use Sepsis-3. ACEP has sent letters to the insurance companies that have used Sepsis-3 in denials. SCCM provided some language for that letter but declined to sign it with ACEP.

ACEP and SCCM also discussed the one-hour bundle. ACEP is working on a new guideline for early emergency care for septic patients. ACEP and SCCM agreed to look at joint research projects that would concentrate on early care of sepsis. 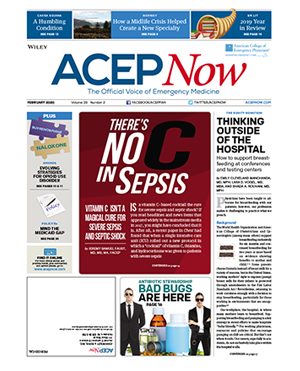 No Responses to “Sepsis-3 Definitions and Reimbursement Discussions Continue”