As practitioners of universal coverage, EM providers should be at forefront of discussions about health care rights and privileges

Just read your first and last editor’s column [At Your Service], and congratulations on taking this path. Your commentary has always been worthwhile, and I expect more of the same in whatever form from you.

A comment on the ACA roundtable you led for ACEP Now. The comments coming from EM MDs were very worthwhile. I understand the need to discuss what we have to deal with and how we can react. It strikes me that, to some, the ACA is not a reality as individual governors may choose to ignore the infrastructure required and delay or hope to cripple the act, that members of Congress still believe that they can blackmail it away.

When you asked, “… is this model sustainable?” the answers were interesting but did not really speak to political realities. In this regard, I enjoyed Dr. Cirillo’s comments about the missed opportunity to discuss this when “‘the Greatest Generation,’ who understood the concept of self-sacrifice for the greater good” was in power.

I would reflect on the oft-used phrase that we (EM) are the safety net. We are universal coverage as required and enforced by EMTALA and our willingness to accept it. Our voice as the actual practitioners of universal coverage should be at the forefront of any and all discussions of what the “right” of health-care coverage is all about. We should be the ones flatly stating that the ultimate question of health care as a right or as a privilege has not been addressed.

The ACA seems to me to have been an effort to provide coverage to more Americans as an attempt to co-opt insurers and those supporting big business, rather than the focus of the real debate. I sometimes cynically wondered if this was a strategy aimed at the outcome of an unsuccessful effort to then be able to focus our attention on the real issue, or the “necessity” of a single-payer system. I am adamantly in favor of universal coverage.

In any case, thanks for listening and all the best in the future. 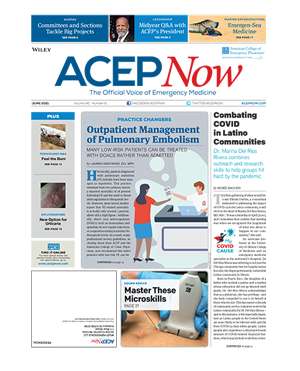 No Responses to “Emergency Medicine and the Affordable Care Act”