Medicine has its dogma, but sometimes it’s wrong and, rarely, it’s challenged and disproved. Recall, “Pain meds interfere with evaluation of abdominal pain”?

So bring on the dogma, “To cut is to cure,” for management of the skin abscess, epidemic in emergency departments since the emergence of a new strain of staph, community-associated methicillin-resistant Staphylococcus aureus (MRSA). 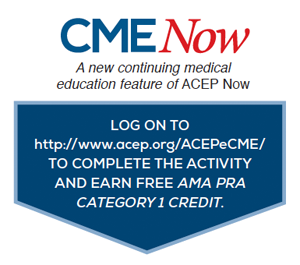 It’s not the cutting that’s at issue, rather the tenet that antibiotics don’t lead to any better outcomes after adequate drainage, just more cost and side effects. That’s what’s been taught and was supported by small studies, including two randomized placebo-controlled trials (RCTs) of approximately 200 total participants each done during the MRSA era.

In your practice, is drainage all you do, or does that depend on your last case of epidural abscess or Stevens-Johnson syndrome? On March 3, 2016, this dogma had its day. In The New England Journal of Medicine, my colleagues and I described the first large RCT comparing trimethoprim-sulfamethoxazole (TMP/SMX) to placebo.1 This National Institutes of Health–funded double-blind study involved more than 1,200 ED patients who had abscesses evaluated by bedside ultrasound, received standardized drainage, and were followed for eight weeks. Participants were discharged and treated with twice the usual TMP/SMX dose, two double-strength tablets BID for seven days, now ED-slanged as “Octa-Bactrim” for eight single-strength tabs per day. Almost all patients were adults, 11 percent had diabetes, and 18 percent gave a history of fever, but a measured temp >38oC was rare. Most abscesses were small, median diameter 2.5 cm (minimum 2 cm, 75 percent were <3.5 cm), with median 7 cm erythema. In 20 percent, the abscess area was >75 cm2.

To our surprise, we found that TMP/SMX led to significantly better outcomes and only slightly more, mostly mild, gastrointestinal side effects and no serious reactions. The number and types of the improved outcomes were notable (see Table 1). At seven to 14 days, significantly fewer TMP/SMX-treated participants had clinical failure requiring a new antibiotic or another drainage procedure. There was a trend toward half the rate of subsequent admits, fewer recurrences, and even fewer infections in household members. Through eight weeks, new abscesses developed in 10.1 percent of the TMP/SMX group compared to 19.1 percent of the placebo group. These findings were for the per-protocol group, the 85 percent who complied and followed-up, but also held up in the intention-to-treat population. This evidence supports routine antibiotic use.