10 of the Best Medical Journal Articles from 2018

If anything can be counted on to be constant in this world, it is change. Stacks upon stacks of journal articles, further refining or altering contemporary medical practice or contradicting each other and adding to the confusion, are continuously published at an exponential rate. Then the biases of those approaching dissemination with an agenda make the literature’s application to day-to-day practice even muddier.

This past year is no different. Here are 10 of the best articles from 2018, excluding a few of the tamsulosin, resuscitation, and other articles already covered in this column.

We’ve spent a great deal of energy over the past decade worrying about, somewhat literally, brain cells exploding when resuscitating children in diabetic ketoacidosis. In this study, four different combinations of 0.9 percent saline, 0.45 percent saline, and rates of fluid replacement were compared without any reliable differences observed.1 Effectively, it is reasonable to consider that resuscitation using a wide range of clinically appropriate rates will be without specific harms.

The concept of managing appendicitis with an antibiotics-first strategy is no longer novel. However, its acceptance into routine practice is not widespread, owing to substantial uncertainty over long-term recurrence and durability of cure. In this five-year follow-up of one of the original clinical trials, the authors found cumulative recurrence by five years was 39.1 percent.3 While that sounds rather high, otherwise stated, 60.9 percent of patients avoided a surgical procedure. It is probably time to start rolling this out as part of the “alternatives” presented during shared decision making and informed consent.

Separating out those ambulatory patients with respiratory infections who might benefit from antibiotics from those in whom antibiotics would be of no benefit is always challenging. Procalcitonin has often been touted as a biomarker capable of informing this decision, supporting antibiotic stewardship with some discriminative power between viral and bacterial etiologies. However, in this prospective trial of 1,656 patients, no reliable impact on antibiotic prescribing was seen, regardless of whether procalcitonin results were available.4 This trial is marred by poor protocol compliance, so the question remains open whether to fault this nonspecific biomarker or the lack of appropriate use of the data (ie, knowledge translation) intended for the intervention.

Prognostic Accuracy of qSOFA in Patients with Suspected Infection

Early sepsis triage and management are rapidly evolving, as are the various administrative burdens meted by the Centers for Medicare and Medicaid Services. The new sepsis guidelines encourage use of the quick sequential organ failure assessment (qSOFA) rather than the systemic inflammatory response syndrome (SIRS) criteria previously emphasized. In this meta-analysis of 38 studies evaluating its prognostic performance in sepsis, qSOFA was found to be 60.8 percent sensitive and 72.4 percent specific for mortality.5 These characteristics leave qSOFA squarely in a no-man’s land of disutility. Its sensitivity is obviously too low for screening, while mortality events are still rare enough that the moderate specificity is also insufficient.

Many clinicians have been raising very reasonable concerns regarding the use of saline in medical resuscitation, citing its various deleterious physiologic impacts. Alternatively, some suggest we ought to prefer balanced solutions such as lactated Ringer’s solution or PlasmaLyte. In this prospective trial, initial fluid in the emergency department was determined by the calendar month, and 13,347 patients were treated with at least 500 mL over the course of a 16-month trial period.6 Although it is difficult to ascertain the clinical importance of this result, there was an excess of adverse renal outcomes in the saline group. Furthermore, once admitted to the hospital, fluid choice was at the discretion of the inpatient team, confounding any minimal effect observed.

Half of the patients presenting with stroke qualify as “minor,” making this cohort fertile terrain for expanding the indication for alteplase. This prospective trial compared alteplase to aspirin for patients with National Institutes of Health Stroke Scale scores from 0 to 5 without clearly disabling deficits.7 The winner is clearly aspirin. In fact, the trial was turning out to be so futile for the alteplase arm, the funders took their ball and went home. These authors enrolled only one-third of their planned sample size, and it wasn’t soon enough to hide alteplase’s clear harms resulting from serious adverse events. The authors take pains to conclude early termination precludes any definitive conclusions, but the professional and financial conflict-of-interest probably makes the opposite true.

We’ve been held in thrall by clinical decision instruments for pediatric head injury ever since the Pediatric Emergency Care Applied Research Network (PECARN) produced its seminal work on minor head trauma. Other countries, specifically Canada and the United Kingdom, similarly have their own preferred brands for the same purpose. Collectively, these three—known best by their acronyms PECARN, CHALICE (Children’s Head injury ALgorithm for the prediction of Important Clinical Events), and CATCH (Canadian Assessment of Tomography for Childhood Head injury)—were tested against each other in Australia and New Zealand.8 The winner: clinicians. Despite performing CTs on only 8.2 percent of the entire population, they missed only two of the 160 clinically important traumatic brain injuries, with similar sensitivity to any of the decision instruments with a fraction of the advanced imaging. Clinical judgment should not be considered inferior to these decision instruments, and our dependence on their use is out of proportion to their value.

There’s a new sheriff in town for C. difficile, according to these recent guidelines by the Infectious Diseases Society of America and Society for Healthcare Epidemiology of America.9 Rather than depending on the old standby, metronidazole, we are entering an era favoring oral vancomycin and fidaxomicin. The use of metronidazole is allowed only begrudgingly as third-line therapy for initial infection when cost is a serious concern. Now, it’s not unreasonable to consider vancomycin and fidaxomicin as significantly more effective than metronidazole. However, cost is definitely a concern. A course of oral vancomycin is fairly expensive at prices ranging from $200 to $400, but fidaxomicin tips the scales at more than $3,500. It should be fairly unsurprising that many of the authors of these new guidelines have conflicts of interest with the pharmaceutical industry.

The HEART Score has gained in popularity over the past few years, and it has been well-validated as an effective risk-stratification tool for the early disposition of patients with chest pain. Typically, scores between 0 and 3 are considered “low risk,” with rates of major adverse cardiac events (MACE) within six weeks between 0.9 percent and 1.7 percent. However, in this large “real-world” cohort, six-week MACE for the low-risk cohort was only 0.4 percent.10 The authors propose that after an acute myocardial infarction has been ruled out with biomarkers and an ECG, the cutoff ought to be a HEART score of 5. This threshold would then confer a 30-day risk for death or acute myocardial infarction of only 1.1 percent. A protocol for early disposition of scores up to 5 could allow for early discharge of up to 90 percent of all patients presenting with chest pain. 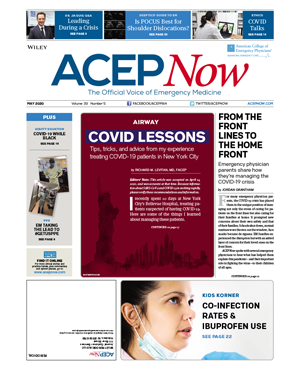 Ryan Patrick Radecki, MD, MS, is an emergency physician and informatician at Kaiser Permanente NW, and affiliated with the McGovern Medical School at UTHealth. He blogs at Emergency Medicine Literature of Note and can be found on Twitter @emlitofnote.